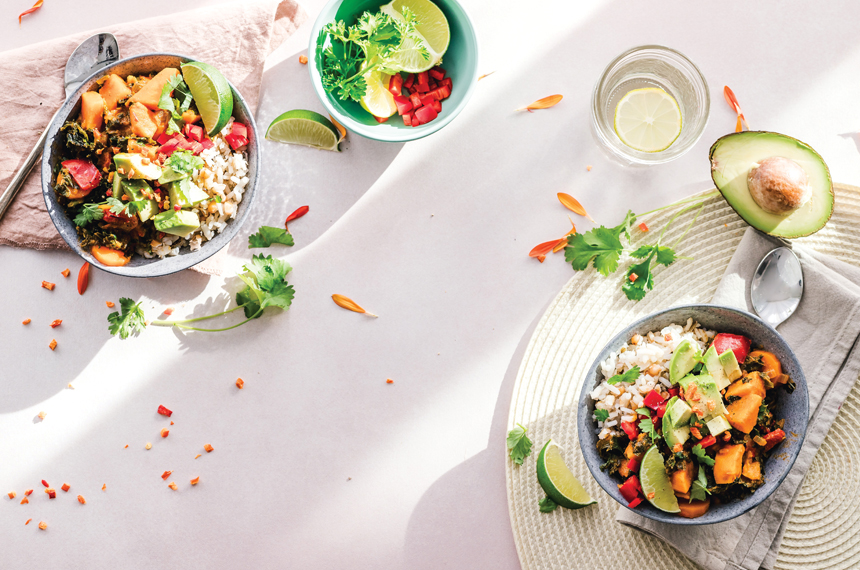 Do you remember being a kid and imagining the future? When I was little I wanted a Star Trek-style machine from which we could order whatever food we wanted and have it magically appear.

That invention hasn’t come to pass – although Uber Eats is almost as good. But what does the future of eating really hold? Here are five ways experts say we’ll change how we eat in 2019.

1. Ditching meat and vegging out
Around six to eight percent of people around the world are vegetarian, but many more of us say we’re “flexitarian” – trying to eat less meat and more vegetables.

International food trend expert Julian Mellentin says plant-based foods are in big demand. “Good new product development is making it easier for us to choose more plant-based meals and snacks, such as mini-beets, cauliflower rice and spiralized courgette,” he says.

We can also expect to see more plant-based protein options alongside the real meat in stores. Although they are marketed at vegetarians and vegans, meat-free meats are also becoming popular with those who want to give vegetarian eating a try.

It’s all down to a shift in how we perceive red meat. There’s something of a backlash against industrial farming (“big food”), and growing health and environmental concerns about meat production.

So this year we’re likely to look for less, better meat; meat as a comfort food or an indulgence, reserved, perhaps, for special occasions.

Beyond 2019, look for even more meat-free proteins, plus “smuggled” vegetables in foods such as ice cream, pizza crust and biscuits.

2. Feeding your gut
Once upon a time, discussion about what goes on in our bowels was private. Now, looking after them is a major trend. The fermented tea, kombucha, is the latest category to become super popular in the service of our intestinal health.

Mellentin says digestive wellness will drive new consumer habits. A2 milk, with its gut-friendly claims, is an example. “It was long dismissed as weird”, he says, “but A2 Milk now outsells plant milks in Australia, and it’s in mainstream stores from the US to the UK to Singapore. Its success comes from delivering a ‘feel the benefit’ effect.”

We can expect to see more gut-friendly goodies such as kimchi and sauerkraut on our plates this year. And Mellentin predicts the next gut star will be kefir, a fermented probiotic beverage made from milk or water.

Beyond 2019, IBS-friendly low-FODMAP foods will become more available. FODMAPs (“Fermentable Oligo-, Di-, Mono-saccharides And Polyols” – a mouthful in its own right!) are types of carbohydrates that are poorly tolerated by people with IBS; a low-FODMAP diet can help with the condition.

3. Carb consciousness
We’re familiar with “low-carb” claims on many packaged foods. Low-carb eating is a global trend; even the rice-loving Japanese are in the middle of what they call a “lo-ca-bo” craze.

But despite the hype around low-carb diets, most of us are never going to ditch carbohydrate foods altogether. What’s more likely is we’ll head towards a more discerning approach to choosing our carbohydrate foods.

“Many consumers will likely adopt some sort of self-defined lower-carb diet”, says Mellentin, who notes we’re likely to make up our own definitions of what constitute good and bad carbs.

This year we’re likely to try new and interesting grains – think quinoa, teff and farro – along with lower-carb varieties of foods such as wraps, cereals and crackers.

Beyond 2019, resistant starch is an example of a “better” carb. It’s a type of fiber that’s useful for gut health, and as we learn more about it we can expect to see it being promoted in our foods. Keep an eye out for green banana flour.

4. Sugar spotting
Sugar (and eating less of it) is still on our minds and influencing our behavior. In the next year we’re likely to become even more savvy about sugar.

That means we’ll be drinking less sugary fizz, and we’ll be less likely to choose foods that have been previously seen as healthy, such as juice, sweet cereal and flavoured yoghurts and milks. We can expect to see more lower-sugar varieties of these, too, made with interesting new sweeteners.

Beyond 2019, monk fruit is the latest natural sweetener on the scene, so expect to see more food and drinks including it among their ingredients.

5. Convenience eating
Even though we want our food to be natural and whole, we also want it to be convenient. “Snackification” means we’re looking for smaller mini-meals – protein bars, roasted seaweed, chickpea snacks, bliss balls and vegetable crisps, all packaged up into small snackable options.

Convenience has driven the success of products such as pre-mashed vegetables, ready-steamed rice and pre-cooked beetroot.  Beyond 2019, look for plant-based ready meals and perhaps, as is popular in the Netherlands, vending machines featuring ready-made fresh vegetable snacks.